"Happiness is not a possession to be prized, it is a quality of thought, a state of mind" 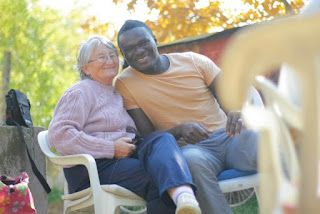 As people grow older, they tempt to associate happiness with things like a good job, a better and bigger property, a car,  or other material things. But what does actually happiness mean? Is happiness a feeling? A learnt behavior? Or a decision?

Since I met my husband I learnt a lot about happiness. He is from Nigeria, a country where people are struggling to survive and most of whom struggle on less than a dollar a day and electricity is switched off for the night. Nigerians really don't have it easy. They are going through bad things every day but they try not to let cicumtances to wave them. And still according to a Gallup end of year poll ranked Nigerians as the happiest people in the world in terms of their economic fortunes for 2011.


2012 was't easier for the country again for example because of the government proposal to remove the fuel subsidy on petrol and that the proce of a litre of petrol jumped from 65 naira to 139 naira a litre.
It of course badly hit ordinary people.

The Islamist terror group Boko Haram continued its campaign across the north-east and Abuja then there was the story that shocked the whole nation when the young woman was raped by five young men.

So, I was thinking what do Nigerians have  to be so optimistic about? I had a quick "interview" with my husband and he argues that "Nigerians have been taught to be positive and have hope every day.
Even if there is no light tomorrow or there is another rape next week, we -Nigerians- always hope that things get better. They live on hope"

I personally loves this way of thinking. I wish the country where I'm from would be a bit more optimistic. As for Hungarians I asked my husband to describe them with a single word. He said : complains...

I guess we have a lot to learn from Nigerians then.