A NIGERIAN MAN IN HUNGARY - PART 2 - BY GBENGA AFOLABI 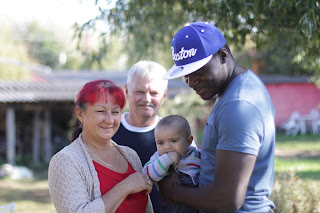 Meeting my father in law

On the fourth day in Hungary finally I managed to meet Emese's dad, Laszlo who surprisingly could speak a bit of English. It is really rare to find people from older generation that can speak any English. In the olden days people had to learn Russian at school because of the Russian influence. It was something that they had to do even if they didn't want to.

Back to my visit in Nyirabrany where Emese's dad lives I was amazed by the big gardens that people have in Hungary. The garden is about seven times bigger than the average English garden. You can grow plants , keep dogs and have loads vegetation. We actually chose to sit in the garden on a blanket as the weather was really hot on that day.
We had lovely food at my father in law's house and I'm convinced again that the best cooks in the world are men. I've been introduced to Hungarian culinary specialties such as the famous Gulyas soup, Chicken soup, fasirt (meatball) and kokuszgolyo ( coconut ball ) and of course toltott kaposzta ( stuffed cabbage ) that I actually find to be more common than the well known Gulyash as I had it everywhere I visited. 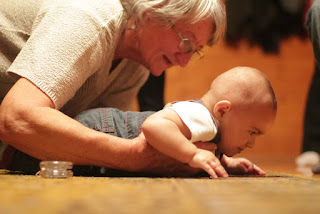 On the same day we visited Emese's grandmother, Mamus and Emese's aunty, Agi and her family. This was the second time that I met Mamus  because she came to England a few months ago to see her great grandson. She's a  very jovial happy go luck person, a really funny character. When she came to see us in she actually literally shocked me with a "shocking pen" that starts working when you try to use it. We had a great fun that time and it continued in Hungary. She showed me her house which was a hundred and fifty years old and her poultry. And of course we had a lot of food. However, my personal favorite was szolo (grapes) that I could eat directly from the branches. This was the first time I've ever seen grapes tree by the way. 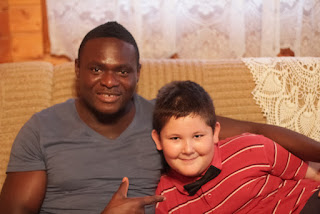 Emese's aunty lives just next door and I've been lucky to met the whole family from Emese's cousins to aunties and even friends. After a lot of food and laughter we decided to go out on the night as we had constant babysitter for our little one.

Clubbing in Debrecen is very different to England. Places open at 11.00 pm and that's when everybody wants to get in the night club at the same time. I even got into an argument with some guys because of their attitude and because nobody seemed to learn how to queue. The design of the nightclub (called Deep) was alright however some barmen definitely need to learn some manners. We ordered 2 bottles of diet coke but we received jack Daniels and diet coke which we obviously didn't want to pay for. In England it wouldn't be a problem to solve the problem and probably the barman would say sorry but in Hungary it was different as the barman was rude to us,

We got tired of clubbing very early so we were about to call Emese's mum to pick us up. But when we got to the cloak room a guy wanted my wife to join them for the night. When I pulled my wife away the guy said "Micsoda?" that means "what?". As I learnt later the guy was probably surprised to see a white girl with a black guy. It was more than enough for me to decide not to go out  in Hungary any more. 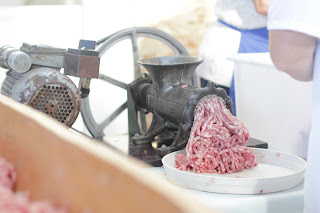 On the fifth day, on Saturday we were invited to a sausage making competition organised by Emese's sister, Diana's church. First time in my life I could see how they make real sausage exclusively from meat without adding any bread or to it. I also met great people from the congregation. Kornel was the star of the ocassion as everyone want to hold or take pictures of him. 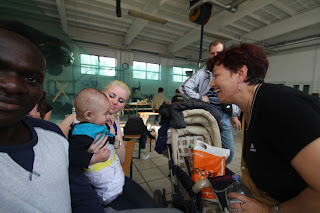 In the afternoon we had a short nap and I found myself being convinced by Emese to go out again.I can't blame her as she hadn't been out since she gave birth to Kornel. So we headed to town  again, people didn't stop staring at us and life went on. We had an ok night