A NIGERIAN MAN IN HUNGARY - PART 3 - BY GBENGA AFOLABI 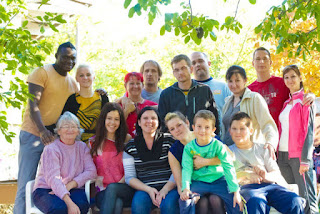 
On the sixth day we had a surprise party organised for Melinda, Emese's older sister who turned to 27. Many relatives came to celebrate together and we cooked Gulyas soup outside in the garden. The weather was lovely which is unusual in October but we definitely enjoyed it. 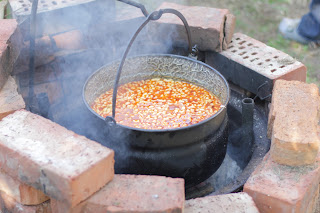 Emese's former home is located next to the forest so I used the opportunity to make a short "horror film" with the younger members of the family. I can tell it was really funny rather then scary.
In the afternoon we went to church that I also enjoyed as I could sing along with the choir , of course in English. I have to say that I met the nicest people in there. Some people even gave some home made toys for Kornel and we had some lovely conversations with some English speaking members. 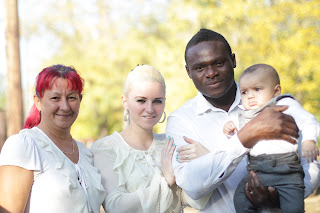 Even though I was really tired in the afternoon I was able to convinced Emese to go for a bike ride in the area. I can't describe the freedom that I felt on the bike. There is not much traffic on Sundays in Debrecen so we could just enjoy ourselves on the sidewalk. Once we stopped for a drink at a pub and I had a bottle of "Borsodi", Hungarian beer that tasted great. I only found out later that there is zero alcohol tolerance in Hungary even for cyclists.
Luckily we did't meet any police of them.

Thermal bath
On our last day, we went to experience one of Hungary's world-famous thermal baths in Debrecen. In the spa we could have the choice of 7 different types of treatments in the indoor and outdoor pools with different temperatures-One of the pool was 40 degree-, steam and sauna. The water is used against different diseases like traumatic extended care, certain heart disturbances and nervous complaints. I will recommend the thermal bath to anyone that is planning to go to Hungary. The only thing is that being the only African at the bath, I got quite a lot of attention from people who could help but stare at me, and since most people don't speak English, all the did was stare without uttering a word which made very conscious of my skin colour whilst there. 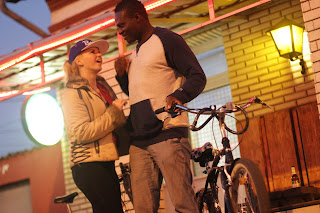 After the bath we had a lunch invitation from Melinda in a nice french restaurant and I couldn't believe when I heard Fela Kuti being played on the sound system. At that point it didn't really matter if anyone stared at me as I was really proud to be an African. .

On Tuesday we chose to stay at home before the journey back home. At 3 pm we found ourselves at Liszt Ferenc (old Ferihegy) airport with full of memories from Hungary. In Hungary the border officers still tried to ask for all sort of documents and family card and it was obvious that some of them didn't know what they supposed to do. Once they found what they needed to find and we showed our marriage certificate we were okay to get on board. Baby Kornel behaved very well on the way home and he actually slept off just before we landed back in the UK. 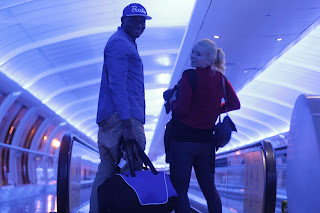 When we arrived in England we went to queue at the "non-European passport" because of my Nigerian passport but soon we were educated by the officer that I should be treated as a Hungarian citizen - because of the my status as the spouse of an Hungarian citizen. All in all I really enjoyed my holiday in Hungary and I've learnt a lot.