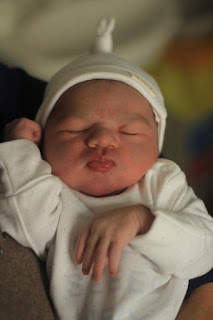 Today I'd like to write about Naming Customs of the Yoruba. My husband is of that tribe and when my son was born we followed the Yoruba naming traditions. First of all we didn't tell anyone the new arrival's name until the naming ceremony.

In my culture the first thing that everyone wants to know when you are pregnant is what your baby will be called?
So following the Yoruba customs we didn't tell the name anybody not even my mum.

The naming ceremony is done on the eigth day, i.e. if child was born on wednesday in one week, it is done on Wednesday the next week.

The cultural area that’s most interesting to me is the actual naming of the child. Apart from the fact that the child can have unlimited amount of names the name of a child in Yorubaland carries a special meaning that depends on circumstances surrounding its birth. The male child was born soon after the death of the father or grandfather may be called Babatunde ( it means the father has come back).The female child born after the death of her grandmother may be called Yetunde. The firstborn of twins is called Taiwo. The other is called Kehinde.


When we were looking for baby names I had to realise how important their meanings were to my husband.

Actually we once agreed on Kornel (longer form Kornelius or Cornelius) but because of its meaning he wanted us to change the name. At that time I was already attached to it and I was very upset about the decision. I didn't want to change. I even cried a half day because of this. And then something miraculous happened. My old nursery teacher sent a friends request on Facebook to my husband and "liked" many of his pictures. Her name is Patko Kornelne. You have to know that in Hungary many women after marriage become known by their husbands' names, e.g. Szendrey Julia, marrying Petofi Sandor, becomes Petőfi Sándorné (the -né suffix approximately means "wife of", this is the Hungarian equivalent of "Mrs. John Smith").

Consequently my old nursery teacher is married to someone called Patko Kornel. My husband thought I sent an email to my former teacher. But the truth is that I haven't spoken to her for 20 years.

My husband said "OK. If this is the name we have to choose I need another sign".....
At night we used to always read "the Bible verse of the day" on an online Bible website. And something miraculous happened again on that day. The verse that we were advised to read was Acts 10 with Cornelius , the Roman army officer.

My husband was very convinced that we got two messages from God on that day and we named our son Kornelius.

The moral of our story is that God always knows what is the best name for your child and we still had the chance to give another 10 names to him later anyway.

If you want to read more inspiring stories e.g. how I found my career path click here