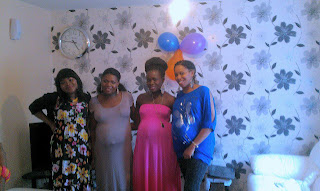 I've been to a baby shower the other day. It was a great fun and a great experience. We were singing and listening to African music,eating naija food and had games like “say a baby boy’s name beginning with the letter that’s been given to you”. I met great people and had a lot of fun.

One thing that I noticed at the party was that everybody was trying to talk to everyone. There were no small groups of people that were only talking to each other. Everybody became a friend of everyone very quickly after the party started.
You would probably say that at a small house party that’s normal anyway. But believe me, I’ve been to places where it wasn't like that.

The person organized the baby shower made sure everybody wore maxi dress and had baby bump. It was very funny when people tied blanket, pillow or even teddy bear to their tummies. Some of the girls even used cotton ball to make their belly button sticking out just as the real would during pregnancy.
So everybody looked pregnant for a day. It was fun. It was also fun when people started to sing Yoruba songs. I wish I could have sung with them but I can’t sing in Yoruba yet. Maybe I will learn something now that I have motivation. I’m always amazed how many songs Nigerian people know by heart. If I want to keep up, I have to learn quite a few of them.

We were also talking about delivery and labour and people were trying to give practical advise to the ones that were expecting for real. When we talked about breastfeeding and caring for the baby, I noticed that almost everyone was breastfeeding who had a baby before. In the UK there are more women that are bottle feeding even though midwifes are trying to promote breastfeeding at every given occasion. 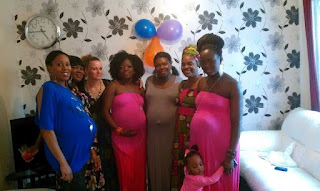 There is one more thing that I have to mention related to African children. African mothers are tying their baby on their back when they are going out or even in the house when they have things to do. This allows the baby to look around and be close to their mummy.
Once my sister in law put my baby on her back and surprisingly he fell asleep within 5 minutes. In a couple of days later I was trying to do the same but I just couldn’t figure out how I should do it. I guess there is still a lot to learn.