Today I want to talk to you about the far-right movement happening in Hungary at the moment and my opinion about it as White Naija Girl.I am originally from Hungary myslef and I cannot reist to express my opinion about the topic. 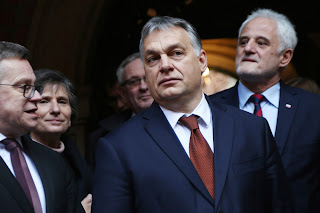 As we know Hungary became member of the European Union in 2004 and Hungarians with their Prime-Minister, Viktor Orban knew what they were getting into, they knew the rules and regulations and the values of EU. Since then Orban spoke hugely against taking in Syrian refugees and since he was elected prime minister in 2010, he has turned public broadcasting stations into propaganda outlets, forced the sale of private stations into the hands of his political allies and taken effective control over the most important courts in the land.

In my opinion Hungarians didn't know what they were voting for as the election was wrongly branded.

Hungary is fighting a losing battle! - that's the way I see it. Hungarians want to get all the benefits of the EU without giving back. It is interesting how this is happening in the time of Brexit and Donald Trump's presidency. But UK and Hungary is not even in the same level economically and its perception by the rest of the world is rather different.

If Hungary is out of EU and God forbid there is a war Hungarians would be really struggling to survive alone.
In my opinion Hungarians are kind heated people but these politicians are using them for their own selfish agenda. They are using their citizens to raise their status.
I have been to Africa, and of course Nigeria has challenges but I don't think Hungarians should be afraid of people from Africa or Middle East especially not the way Orban portraits the situation


Every house has their own habits as we say it in Hungary so why is it not alright to have different cultures in the same country in 2018? I live in the UK and I find it refreshing that you can experience different cultures from the comfort of your home.


All in all I cannot blame Hungarian people a lot of people don't educate people, they don't travel , talk to other ethnicity. There is so much more to this issue!