I remember when I first met my Yoruba husband and asked him about his culture. He told me about respecting elders by prostrating as a boy and kneeling down as a girl. I also remember that I didn't know what prostrating meant so my husband had to lay down on the floor to show me.

Just in case if you are European and don't know what it means let me explain it to you. First look at this picture. 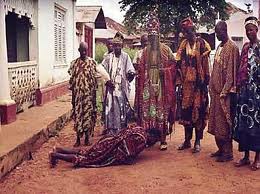 The person is prostrating to the others, he's laying down, he's not shaking hands because that will be deemed disrespectful in Yoruba culture especially while greeting Royals. You can get away with not doing this "properly" in big cities or urban areas but even there you have to prostrate "halfway" . For women kneeling is the norm and just as with men women can do it "halfway" as well.

First I thought this was a bit weird but then I remembered that even Hungarian men give a slight bow when they greet older people as a sign of respect. So although it may seem quite extreme than one man lays flat before anotheraa, it is somewhat understandable.